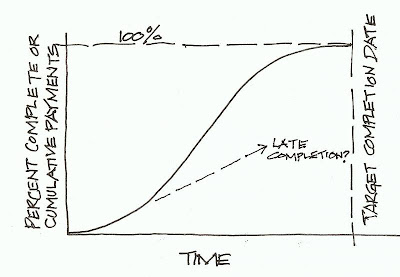 One effective way to monitor progress on a construction project is to consider cumulative payments to the contractor or claimed percent complete against an estimated payment schedule that should be established at the start of the project. In most cases the estimated schedule of cumulative payments or percent complete should look like an ‘S’ curve, similar to the one in the diagram above. It is likely to be relatively flat at start-up, due in part to the limited number of trades that can work on the project at first. As the project advances, progress allows the addition of trades (and workforce), indicated by the steeper line in the middle of the ‘S’ curve. The flatter tail end of the project represents a reduced workforce, fewer trades, finishing details, and punch-list work.

If actual progress looks much different than the ‘S’, the project may be headed for trouble. For example, a prolonged flat period at the beginning (or a shallower slope on the steeper part of the ‘S’ as shown by a dashed tangent line above) may forecast a late project completion. Alternatively, if requested payments suggest a steeper curve earlier in the project, the requested payments could be exaggerating actual progress, and one bad result could be releasing too much money too early and not holding enough funds to complete the project. The ‘S’ curve should not be considered an absolute measure of progress, but it can be an effective tool for comparison and forecasting.

[Note that a similar approach can be used for looking at design progress. See Staffing a design project.]