Suspended wood ceiling systems can look very nice and can earn LEED credits for the right wood, but all components of the system must work together in order for the ceiling to stay up.

A few years ago in a new public building, several pieces of a suspended linear wood ceiling fell to the floor during the first few months after the building was occupied. The ceiling consisted of (nominal 1 x 4) veneered wood “slats” or planks attached to metal suspension components. From below, the finished ceiling looked like one of the manufacturer designed systems which had been specified. However, aside from the veneered wood slats, the as-built ceiling was actually quite different from the specified systems.

A close look at the suspension components revealed custom connections consisting of 6-inch long aluminum pieces cut from lightweight linear aluminum pans that are typically part of a proprietary, lightweight linear aluminum ceiling system that does not include or carry wood. The contractor’s shop drawings referred to the 6-inch long pieces of aluminum pan as clips which would be attached to the top surface of the wood slats and fit (or snap) over the tabs of suspended carriers. To accomplish this attachment, the contractor stapled the custom aluminum clips to the top of the wood slats, and then pushed or tapped the wood slats up into position to secure them to the tabs of the aluminum carriers.

During installation, the contractor experienced problems with the connections and made changes to the system. The aluminum clip material was not strong enough and resilient enough to make a secure connection between the wood slats and the carriers, and there were not enough connections. Some wood slats had become detached from the carriers, and there were problems achieving the initial engagement of the aluminum clips to the carriers. (All of the named wood ceiling system manufacturers specified for the project utilize proprietary clips made of resilient spring steel, not thin aluminum.) The layout of the suspension system included wire hangers in a 4 ft. by 4 ft. grid with suspended carriers 4 ft. on center, such that each 8 ft. long wood slat had only two clip connections to the carriers, and custom aluminum splines utilizing the same clip material had been devised to connect the wood slats at end-to-end joints. While the clip and carrier spacing might have been adequate for a lightweight linear aluminum ceiling system, the heavier linear wood ceiling needed more attachments, more carriers, and more hanger wires from the structure. The contractor decided to double the number of carriers and clips by changing the carrier spacing from 4 ft. to 2 ft., resulting in a suspension layout more typical for a heavier ceiling system. Wood slats which had already been installed were removed to allow for installation of the additional carriers and clips. At the same time, wood screws were used in lieu of (and in addition to) the earlier staples to attach the clips to the wood slats, such that the new clips had screws and most of the original clips had both staples and screws.

Many of the aluminum clips suffered permanent damage during installation, removal, and re-installation of the wood slats. Unlike flexible linear aluminum pans, which can be twisted and flexed to allow them to be snapped sequentially over the tabs of the carriers, the wood slats do not allow for twisting and flexing, relying instead solely on the resilience of the vertical legs of the clips to open wide enough to go over the tabs of the carrier and to then spring back to their original configuration to lock the clip to the carrier. It was clear that the manufacturer of the clip material had not designed or intended the linear aluminum pan material to be used as clips to carry a wood slat ceiling. Legs of the aluminum clips had been permanently deformed or cut, and some of the tabs of the aluminum carriers had also been deformed by forceful installation of the wood slats. 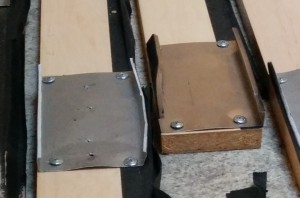 The photo above shows damaged and deformed aluminum clips which had been cut from the aluminum pans of a linear aluminum ceiling system.

The photo below shows a resilient, spring steel clip from an Armstrong linear wood ceiling system. 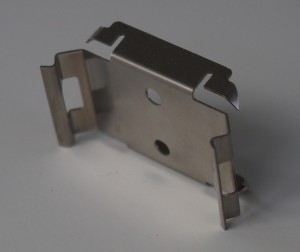 A more recent collapse of a suspended wood ceiling system in a restaurant again reminds us of the value of single source responsibility and the importance of an adequate, engineered suspension system, anchors, and attachment components.